Note: This was featured as part of our Wednesday segment on Charleston’s 105.5 The Bridge with Box in the Morning. You can catch us every other Wednesday morning at 8:50 am ET for the latest law tips and legal news. You can listen to the segment below:


The start of the new year is a chance to change old habits and form new, better habits. Why not start with something that you do almost every day: driving. Since we lead busy lives, it’s easy to justify multitasking. You never think you will be a victim of an auto accident until you become one.

In the United States, 98 percent of drivers who own cell phones and regularly text said they were aware of the dangers, yet 75 percent admitted to texting and driving. Although there are laws against texting and driving in some states, the habit causes 1 out of every 4 car accidents in America.

Despite repeated admonitions to avoid drinking and driving, alcohol-impaired crashes account for nearly 30 percent of all traffic deaths in the United States. In 2015, 10,265 people died as a result of drunk driving. Shockingly, 16 percent of the 1,132 traffic deaths involving children between the ages of 0 and 14 were alcohol-related.

In South Carolina alone, over 700 people died in traffic-related accidents last year. An annual report by CarInsuranceComparison.com ranked SC drivers as the third worst in the nation based on data from the National Highway Traffic Safety Administration.

Instead of pressing “I’m not driving” on your phone or app in order to send a text, make a commitment to drive without distractions or impairments in the new year and beyond.

Let’s do something about this today. We want everyone reading to pledge with the John Price Law Firm: 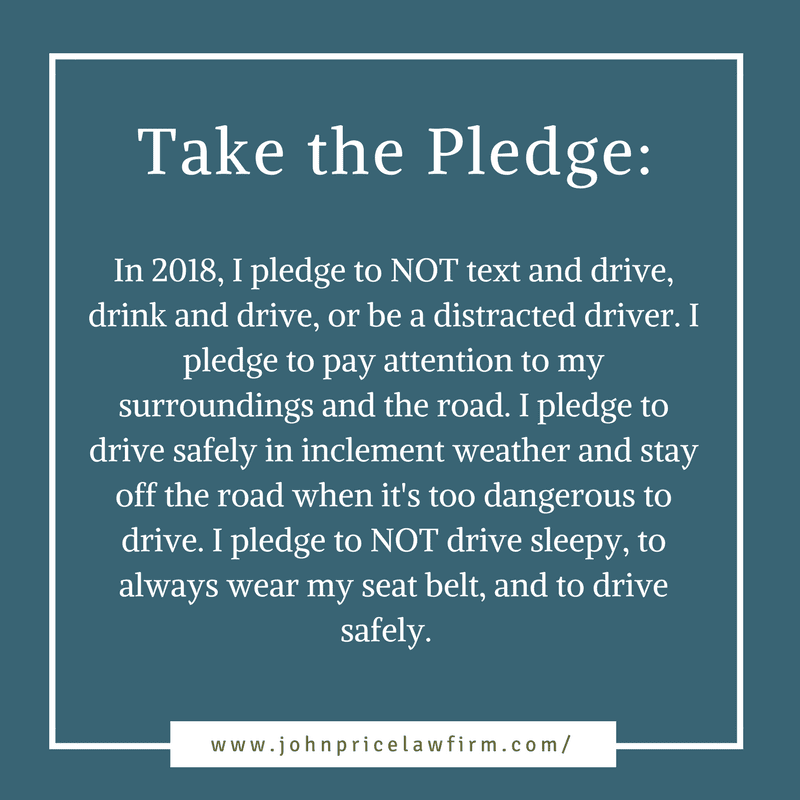 Let us know that you have taken this pledge. If you are aren’t driving, head over to our Facebook page: @JohnPriceLawFirm and comment “I pledged” under the Pledge post. Let’s make 2018 the safest year on the roads for SC. Drive safe!

Driving in the Rain in the Lowcountry

Steps to Take in Workers’ Compensation

How to Handle a Hit & Run

Why You Need a Charleston Truck Accident Attorney on Your Side